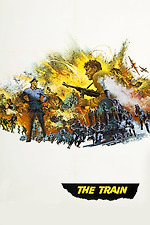 IMDB trivia says this was ranked #1 in Trains Magazine’s list of 100 Greatest Train Movies. That about says it all.

A weird sort of action/adventure: in the last days of WWII, the German army is trying to get a train full of priceless paintings out of France and into Germany. Burt Lancaster and crew are tasked with slowing it down in any way possible – not to damage anything, not to rob the train, just to delay and impede as much as possible, without getting caught.

This almost never does the heist movie thing where they explain their plan, and then you see them either succeed at it or watch as things go creatively awry. The film keeps you one step behind, never narrating what they’re about to do – just doing it. It’s a smart approach that also makes for a slow and sometimes confusing start, you really need to pay full attention.