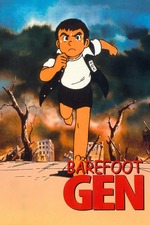 Yay:
- Showing what happened at Hiroshima through the eyes of children
- They made the light-hearted stuff work
- It feels real
- I instantly fell in love with the family
- Opening song
- Gut wrenching sad
- You know what's coming but it still hits you so goddamn hard... especially because you got to know everyone so well during the first half of the movie
- 80s TV animation style
- Pretty neutral regarding politics
- Release of the bomb
- I did not expect to see such brutal and gruesome images after the light-hearted first half
- The narrator
- The mother looking for milk for the baby
- So many WTF moments
- Doesn't take prisoners
- I have no idea how they managed to mix that many comedic elements into this movie in such a perfect way

Nay:
- The main character not having a single scratch while everyone around him almost immediately turns into zombie like creatures
- During the most emotional scenes, they are overdoing it with overly jittery character behaviour