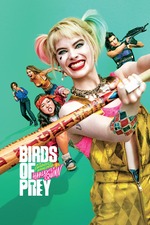 There's a scene in Birds of Prey where a character is breaking into a prison and accidentally activates the sprinkler system before she starts fighting the prisoners one by one. Why? Because it looks really cool when people are fighting in slow motion in puddles of water!

That's the aesthetic driving force of this film: Because it looks cool!

And indeed, it does look cool. None of the characters in this movie have super powers, so in place of the typical CG-heavy razzle dazzle that we're accustomed to, the movie features extremely well-choreographed and performed hand-to-hand fight sequences. All the actors, Robbie especially, do a great job selling these sequences and they are a joy to watch.

But is there any substance behind the style? Birds of Prey focuses primarily on Harley Quinn and poses the question as to whether this character, who has often been defined by her relationship to another character, can support her own film.

To make that happen, the movie throws a ton of ideas at the wall. It introduces a colorful cast of characters, including Ewan McGregor playing a scenery-chewing villain and Rosie Perez playing a cop who is straight out of an 80s TV show (a fact that's remarked upon by several of the other characters). It tells its story Fight-Club-style with a first-person narration and rapid time jumps just to make sure you don't lose interest.

But the fundamental problem with making a film based off of a villain is that at some point the villain needs to be someone you can root for. Harley Quinn always struck me as one of the scariest characters in the DC Universe. When I've seen depictions of her in the past, as in Batman: The Animated Series, I always found her psychosis to be terrifying. How could someone who was once a regular, functioning member of society be changed to a killer over something like love? If it could happen to a psychiatrist like Harley Quinn, it could literally happen to anyone. Such was the Joker's persuasive power and madness.

The film doesn't do anything to explore that dynamic. Instead, it gives her a redemptive arc - one that I didn't find particularly convincing. Whether you feel the same way will dictate how much you appreciate the film.

It sure is a lot of fun to look at, though!