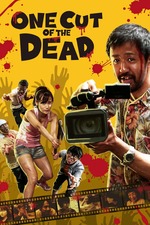 Super fun movie. It's only horror in the sense that it has zombies in it - at no point does it try to be scary. It's quite funny and even has a feel-good ending! Don't think it's just another zombie film, because it really isn't at all.

The basic premise is that a film crew is shooting a zombie movie in an abandoned factory, but are attacked by real zombies. That's only part of the film though, and it's pretty creative and original so I won't spoil what happens here.

Already one of my favorite films I've seen this year. Highly recommended.

God Told Me To