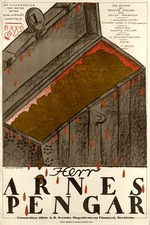 In researching the history of Swedish film, I'm coming to discover how rich this ear of filmmaking was for Sweden and Swedish filmmakers, featuring modest but consistent growth in creative voice over the years. Given their positioning in the wars, their neutrality allowed them to continue on this trajectory in ways that other territories were unable to, beginning with a series of films from this era that all built on a shared trajectory, playing around with location shooting and naturalist settings, northern lighting, double and multiple exposures (with an interest in spirits and ghosts), and interesting narrative structures (Northern Exposures by Arne Lunde).

Sir Arne's Treasure is a great example of all of the above. I just love the look and feel of this film, which evokes a realism that mixes with an almost mythological and surreal setting. The way the northern lights really do come alive here plays off the duel presence of ice and sea. And the story, while a bit weaker in spots than others (the romance is a bit misplaced at times), is a nice balance of cultural nuances, including spirits, justice and liberation.

Mostly though its the old town atmosphere, which brings together lights and darks in a magical way, that really comes alive here, making this a memorable addition to my travels through Sweden.