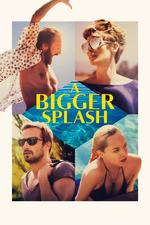 There's a scene towards the end of Nagisa Oshima's deservedly infamous "In the Realm of the Senses" in which hotel owner Kichizō Ishida — taking a rare break from the all-consuming fuck-fest that will soon end in his death — stumbles down the street as a phalanx of soldiers march in the opposite direction, mobilizing for World War II. Ishida, who's been so busy screwing that he hasn't showered in weeks, barely even notices the army as they pass by. At a time when nationalism was all the rage, Ishida and his lover were radicals for their self-imposed solipsism, for tuning out the world beyond the small room that had grown pungent with the smell of their bodies.

There are few better metaphors for the myopia of hedonism than a swimming pool on an island paradise surrounded by the sea. The four beautiful creatures at the heart of Luca Guadagnino's gloriously vibrant "A Bigger Splash" may exert more control over their sexual appetites than Ishida ever could, but their debauchery is fueled by a similarly narrow focus.