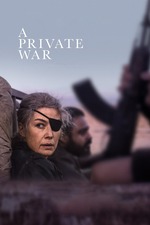 To judge by Matthew Heineman’s occasionally clumsy but thoroughly harrowing biopic, renowned war reporter Marie Colvin was only afraid of two things: Dying young, and growing old. It’s a dilemma that would bind the American ex-pat to her job until the day she lost her life while covering the Syrian Civil War. For “Cartel Land” director Heineman — a notable documentary filmmaker whose recent “City of Ghosts” chronicled the ongoing atrocities committed against the people of Raqqa — Colvin’s plight offers a natural way in to the world of narrative storytelling (and the excuse to restage a half-dozen of the bloodiest modern conflicts that predated his career).

But there’s nothing opportunistic about “A Private War.” Watching the film scramble towards its inevitable conclusion, one gets the sense that Heineman sees Colvin as a kindred spirit. And while even he struggles to make sense of how she lived — or to fully justify how she died — Heineman finds something real in the rubble. In his own way, and with the invaluable help of a tremendous lead performance from Rosamund Pike, he’s even able to continue the work that Colvin left behind.