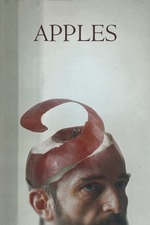 Pandemics come in a handful of different varieties — some we accurately diagnose, and some we don’t even notice. A highly contagious outbreak of coronavirus (to pick a random example) leaves behind a trail of bodies that makes it rather easy for right-thinking people to recognize the disease for what it is. Other global health crises, however, can be harder to spot. The ones that poison our mental health. The ones that disguise themselves as progress. The ones that seduce us into forgetting who we are.

Set in an analog and uncertain version of the recent past (or perhaps in a parallel universe where the iPhone was never invented), Christos Nikou’s “Apples” begins in the midst of a slow-rolling plague that spreads mysteriously and leaves its victims with severe amnesia. Details are scant, but the crisis has been around long enough that people in Greece have learned to live around it; the healthy go about their normal business, while the sick are corralled into the “New Identity” program the government hosts at local hospitals and advertises on the radio in between Simon and Garfunkel songs.

It’s not as nefarious as it sounds. In fact, the Disturbed Memory Department is more humane than most Americans could imagine — it’s like a rehab for remembering. Or at least it would be if people could remember anything. Instead, “unclaimed” patients like Aris (Aris Servetalis) are tasked with building new identities, a process that involves following the bizarre instructions his doctors record for him on a cassette tape and taking Polaroids as proof that he followed through on each increasingly specific assignment. Ride a bike. Go to a costume party. Meet a girl in a bar, have sex with her in the bathroom, and then leave without saying goodbye.

If Nikou is never shy about following in Yorgos Lanthimos’ footsteps (the first-time helmer served as assistant director on “Dogtooth”), that signature deadpan strangeness only grows more pronounced as “Apples” starts to ripen. But this dry modern fable is softer and more delicate than “Alps,” “The Killing of a Sacred Deer,” and the rest of its unmistakable blood relatives. It’s hazy where Lanthimos’ work is razor-sharp; vague instead of violently literal. There’s even a twinkly music box-like score that wouldn’t be out of place in a Drake Doremus movie (composer The Boy gilding the images with string flourishes that sound like synapses fusing together).

But if Nikou’s debut seems poised to become the most opaque movie ever made about the mind-obliviating corruption of digital technology — less a screed than a gently urgent reminder to exercise our memories instead of outsourcing them to the cloud — the film, like it’s drifting hero, struggles to forge an identity of its own.