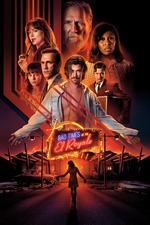 Drew Goddard likes to watch. As he made clear in his sly and self-reflexive 2012 debut “The Cabin in the Woods,” he likes to place his characters in a hall of mirrors that only he can see clearly, and he likes to make his audiences to shudder at their own reflections in the glass.

Of the many things his rollicking second feature has in common with his previous one, the most fundamental is that both films take a genre that’s grown painfully stale, step back until we’re looking at it from a god’s-eye view, and then — however damning it might be — force us reckon with what we love about them. With “The Cabin in the Woods,” Goddard deconstructed horror tropes from the inside out in order to explore how slashers and monster movies satiate the collective bloodlust that we bring into the theater. And with the clever, patient, and almost genuinely moving “Bad Times at the El Royale,” he vivisects post-Tarantino crime sagas in order to explore how these stories allow us to look through the heavy veil of morality that tends to fall over our eyes in the clear light of day.

Walking into the theater for “Bad Times at the El Royale,” it’s obvious from the pulpy title alone that you’re about to spend a long night with a sordid bunch of low-lifes, all of whom want to tease out a little sympathy for the devil. The fun of Goddard’s fiendishly unpredictable new film — a piece of major studio entertainment so patient and artful that it might as well be a time machine back to the mid-’90s — is that it compels you to give the devil the benefit of the doubt. Not only that, it lets you in on the trick until you stop asking if you should be forgiving these characters, and start questioning why you’re so eager to try.