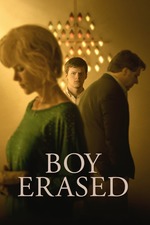 “Boy Erased” is neither the first, nor the best, of this year’s films about the crucible of gay conversion therapy, but Joel Edgerton’s adaptation of Garrard Conley’s memoir is most interesting for the ways that it differs from “The Miseducation of Cameron Post.” Although it’s fortunate we have both, and tragic that we need either, “The Miseducation of Cameron Post” leveraged the awful and dehumanizing evangelical practice into a coming-of-age saga about a teenage girl’s hard-won self-acceptance; “Boy Erased” uses a similar premise to deflect that burden outward — to put the onus for change and understanding on the misguided people who surround its traumatized young protagonist.

The result is a powerfully conflicted portrait of the relationship between love and hate, a story in which all but the ugliest bigotries can be traced back to a misguided sense of protection. While Edgerton’s fractured approach has a frustrating way of compartmentalizing his characters into their own subplots, making it hard for the movie to convey the full sweep of its emotional journey, “Boy Erased” regards everyone with such raw empathy that even its most difficult moments are fraught with the possibility of forgiveness.