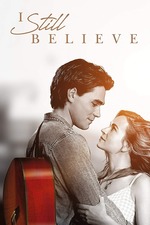 Hot off the breakthrough success of 2018’s “I Can Only Imagine,” Alabaman brothers Andrew and Jon Erwin are back to convert an even wider secular audience with another harmless and tin-eared Christian rock biopic that combines the melodrama of Douglas Sirk with the edginess of Bible camp. But while “I Still Believe” name-checks Jesus so often that he should probably get residuals for it, this heartrending true story about love, loss, and the universal struggle to make sense of our suffering is broad enough to resonate with anyone who’s ever had to search in the dark for their own measure of faith.

Or at least it might have been if the Erwin brothers weren’t so unwaveringly earnest with their sermonizing — so hellbent on finding God that they forgot to make any of their characters feel human. Sanitized to the point that it makes “A Walk to Remember” seem like “Salò” by comparison. Led by a “Riverdale” actor whose outspoken piety can’t offset the suspicion that he was body-snatched away from his sinful day job at the CW (the devil’s network), “I Still Believe” epitomizes the oppressive wholesomeness of recent “faith-based” cinema by preaching to the choir while refusing to offend the congregation. Its soul is open, its mind is blank, its flesh is numb (and always covered).

Dreadful and dangerous as more antagonistic fare like “God’s Not Dead,” “War Room,” and even the Erwin brothers’ own anti-abortion drama “October Baby” might be, at least those films had the courage to reckon with the messiness of this mortal coil. Jeremy and Melissa Camp’s story is one that anyone could appreciate, but it’s been turned into a movie that only Ned Flanders could believe.