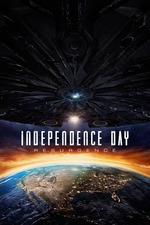 In the summer of 1996, Roland Emmerich’s “Independence Day” reinvented the alien invasion genre for the blockbuster era, using newfangled digital technology to make a B-movie big enough to bring the whole world together. Its reputation may be overinflated by millennials who subsist on a steady diet of their own petrified kitsch, but Emmerich’s war of the worlds has nevertheless come to represent a type of full-bodied studio spectacle for which we all ought to be nostalgic. In fact, the self-described “master of disaster” seems really pissed at the people who aren’t. His lazy insult of a sequel — threatened since the day the first movie first cast its long shadow over America’s multiplexes — is ultimately nothing more than a giant middle finger to a generation of ungrateful moviegoers who didn’t appreciate how good they had it: “If you ingrates thought that was bad,” Emmerich cackles from behind the camera, “you ain’t seen nothing yet.”