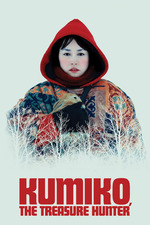 “I am like a Spanish Conquistador. Recently, I’ve learned of untold riches hidden deep in the Americas.”

So Kumiko (Rinko Kikuchi), a peculiar 29-year-old clerk who shares a decomposing Tokyo apartment with her pet rabbit Bunzo, confesses to the nonplussed security guard of her local library after she’s attempted to steal a book of maps. The “untold riches” to which Kumiko refers are the unclaimed bricks of prop cash that – towards the end of the seminal 1996 film “Fargo” – Carl Showalter (Steve Buscemi) buried beside an anonymous stretch of highway somewhere near Brainerd, Minnesota.

Kumiko, who ostensibly seems to understand that Ethan and Joel’s frigid crime saga is a work of fiction, is nevertheless convinced that the money is still there for the taking, waiting beneath the snow for an enterprising treasure hunter to unearth the small fortune and wrest it into reality. It’s an idea that first occurred to Kumiko after she stumbled upon a VCR-shaped slot of rock on the shore of a desolate Japanese beach and found a worn videotape of “Fargo” waiting for her inside the cave’s oblivion.

This is a true story.

…Which is not to say this is a story that actually happened.

Self-reflexivity has always been one of the cinema’s most natural and frequently occurring impulses, and David and Nathan Zellner’s “Kumiko, the Treasure Hunter” continues a tradition forged by examples as disparate as “Sherlock Jr.” and “The Purple Rose of Cairo” in how it explicitly articulates the idea that only the most useless of movies are confined to the screen on which they play. In fact, one of the most compelling undercurrents of the digital revolution and the ubiquitous availability of streaming content is that it’s becoming more difficult for viewers to identify where the cinema ends and life begins. Perhaps the unmoored circumstances through which people increasingly engage with movies will elucidate why trying to separate fact from fiction in a film is ultimately as impossible as trying to separate sugar from eggs in a cake.

The blissful “Kumiko, the Treasure Hunter” opens with a scrawl of warped text claiming that “This is a true story”, but the barely legible title card is borrowed from another film. It’s not enough for Ethan and Joel Coen to make great films, they must also make great films possible. Of course, “Fargo” didn’t exactly stick to the facts, or even really make it clear to what story it was supposedly being true. The brief statement with which the Coen brothers’ crime drama began was something between a stretch and a joke, and the Zellner brothers’ equally brilliant but virtually unclassifiable film shares a similar relationship to the truth. The details as to how the Zellners tweaked this particular tale are as interesting as they are completely irrelevant – “Kumiko, the Treasure Hunter” isn’t about divining the difference between fact and fiction, but rather about how the two are inextricably entwined.

THIS REVIEW CONTINUES ON FILM.COM: www.film.com/movies/sundance-review-kumiko-the-treasure-hunter