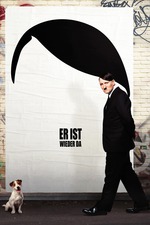 Once, the idea that a Hitler could rise to power in the 21st century seemed like the fantasy of conspiracy theorists. Today, a better question isn't if Hitler is coming back, but if we'll recognize him when he does. Maybe, as in the episode of "Andy Richter Controls the Universe," he'll come back as the coffee cart guy at a corporate office in Chicago. Maybe, as some have cast Donald Trump, he'll come back as a bullying businessman who would tear the world to pieces just to secure the power that money can't buy. But, as a horrifyingly perceptive new German comedy reminds us, one thing's for sure: Hitler won't come back as himself.

READ THE FULL ARTICLE ON INDIEWIRE