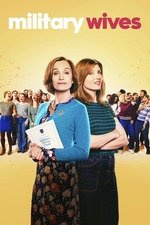 A nice enough time that never really aspires to be anything more, “Military Wives” isn’t just the kind of movie that ends with Sister Sledge’s “We Are Family,” it’s the kind of movie that ends with the entire cast singing along. Steered right down the middle by “Full Monty” director Peter Cattaneo (who could make this sort of feel-good fluff with his knickers around his ankles, and shoots it with such basic instincts that you’d almost believe he actually did), this semi-factual charmer tells the true enough story of some British army spouses who learn to sing through their sorrows.