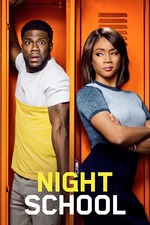 “Night School,” which is easy to tell apart from previous Kevin Hart movies because it takes place in a school at night, is a major turning point in its star’s long and prosperous career. Barring a complete overhaul of his entire brand, this botched first draft of a bad comedy is the last time that anyone will ever catch themselves waiting for Kevin Hart to do better. Because even if he can be funnier than he is here — a low bar that many of the funerals I’ve attended have managed to clear — it’s growing increasingly obvious that he isn’t willing to try.

That his latest and least amusing film ends with an earnest speech about the value of self-improvement only adds insult to misery, as Hart is just repackaging the same manic shtick that he’s driven into the ground with the likes of “The Wedding Ringer,” “Ride Along,” “Ride Along 2: Here We Go Again,” and (presumably) the forthcoming “Ride Along 3: The Crimes of Grindelwald.” Once again he plays a motor-mouthed striver with a heart of gold, and once again he uses an elastic mask of empty affect to hide the fact that there’s nothing going on behind it. The comedian’s bag of tricks is so limited that all of his roles have become utterly indistinguishable from each other; even when he played a teenage jock who’d been transmogrified into a small adult man’s body, it somehow felt like more of the same. If there’s a good actor under there, Hart is keeping him hidden like a secret.