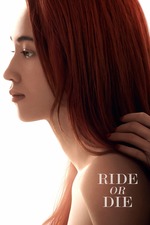 Hiroki Ryuichi’s “Ride or Die” begins with a premise that sounds like the stuff of hard-boiled neo-noir: Abused by men her entire life, a straight Japanese housewife coerces the long-estranged lesbian friend who’s been in love with her since high school to kill her violent husband. And yet from the start it feels like we’re missing a few key details in the fine print of what’s going on here — there’s something almost right fluttering beneath all this wrong.

Sordid as it might be for Nanae (Sato Honami) to offer her sex to Rei (Mizuhara Kiko) in exchange for a murder, the manipulation is so brazen that it bends all the way back around to its own kind of ineffable truth. Even as it becomes painfully clear that Nanae won’t be able to hold up her end of the bargain anytime soon (she strips naked on the bed of her Tokyo apartment to show Rei a body that’s tattooed with fresh bruises), there’s a jagged sense of intimacy to how well these two women both seem to understand the terms of their arrangement. Maybe this only looks exploitative from the outside. Maybe people are transactional creatures by nature. Maybe, after more than a decade apart, Nanae and Rei still recognize they have something valuable to offer each other in a world that has taken so much from them both.

Whatever the film’s ultimate takeaways might be (and you better believe that mileage will vary), “Ride or Die” doesn’t lead viewers towards them by any obvious route. By the time this rewardingly non-prescriptive slab of pulp fiction even arrives at its flex of a title card — which drops at the end of a bloody 28-minute prologue that pings against everything from “The Postman Always Rings Twice” to “Thelma & Louise” — it’s clear that Netflix’s latest Asian slow-burn isn’t adhering to the path of any particular narrative tradition, least of all those of the soft-hearted Yuri stories that Hiroki’s source material subverted to powerful effect.

Adapted from Nakamura Ching’s popular manga series “Gunjō,” “Ride or Die” is a much-needed change of pace from the kind of modern cinema that reduces every story to its moral arithmetic, and a helpful refresh for the kind of modern audiences who watch movies the same way. It’s a shaggy and distended portrait of friendship that pinballs through time as freely as it does between genres, and a few too many of the 140-minute story’s frequent detours wind up in dead ends, but “Ride or Die” retains enough forward momentum to roll across even its least successful chapters because of how stubbornly Hiroki refuses to keep score between these characters.