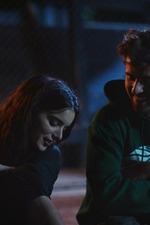 ***While the 2020 SXSW Film Festival has been canceled due to the coronavirus, IndieWire is covering select titles from this year’s edition.***

It’s a shame that Cooper Raiff’s “Shithouse” didn’t get a chance to screen at this year’s SXSW, because this knowing and funny nano-budget debut is exactly the kind of film the Austin festival exists to showcase. And that’s all the more true because it sounds like such a potential nightmare on paper: Written, directed, and co-edited by its reluctant 22-year-old star with some help from his friends, Raiff’s vulnerable DIY gem tells a coming-of-age story about a mopey college freshman who’s struggling with the whiplash of leaving home.

He meets a girl, they spend a magical night together, things get awkward in the morning but maybe they’ll still be able to help each other figure shit out… you know how it goes. It’s basically the Platonic ideal of the movie you’d expect from a suburban white American softboy who’s been raised on Richard Linklater and “Sex Education.”

But here’s the catch: It’s good. Like, really good. And more than that, it somehow feels completely singular despite its lo-fi approach and even lower-concept premise. That starts with Raiff’s palpable disinterest in seeming cool. Don’t be fooled by (what could be misconstrued as) the look-at-me edginess of its title — “Shithouse” is guileless and sincere in a way that would get it bullied at school. Shot at a static remove that reflects the indifference of the outside world, but still beating with the open-heartedness of a video diary, Raiff’s debut pushes back against the general patois of zoomer disaffection to endearing effect, in order to reckon with the idea that growing up into the people they’re supposed to become should require kids to shrink away from away from the people they already are.