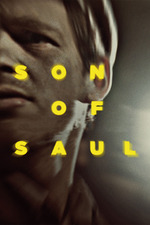 dear lord. the concentration camps as seen through the eye of a hurricane. takes a tough "the holocaust was no bueno" stance. diffuse but still monumental.

to unpack that last fragment a bit, i mean to say that the film's "Dardenne brothers go to Auschwitz" approach creates an emotional bugger of sorts... this isn't someone placing a stone on Schindler's grave, you'll probably be too shell-shocked to cry. horrifyingly, you'll want to see it again.

but this is intentional: the idea is to capture the chaos of the camps. the busyness. the sense that there's no room for morality in a machine. the logistics of evil. in that sense, the closest comparison might outwardly appear to be KAPO or NIGHT AND FOG. but then, to think back on Spielberg and his devotion to talmudic virtue... "whomever saves a life saves the world entire."