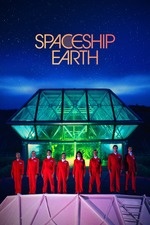 On September 26, 1991, the world watched as eight visionary hippies dressed up as cosmonauts and sealed themselves inside the massive, environmentally self-sustaining, $150 million glass vivarium where they would live together for the next two years. The facility was dubbed “Biosphere 2,” a man-made sequel to Earth that would offer a microcosmic glimpse of our impact on the planet, and explore the possibility of replicating it elsewhere in the galaxy. A non-profit that was populated by the members of an experimental theater troupe and funded by the heir to a Texas oil fortune, the project was hailed by some as “the most exciting scientific undertaking since we launched toward the moon,” and derided by others as “New Age drivel.” It was beautiful, it was flawed, and it ended — as America’s most aspirational undertakings often do — with Steve Bannon destroying the whole thing out of spite.

But if a clear villain emerges in the final minutes of Matt Wolf’s rich and resonant new documentary, the rest of “Spaceship Earth” is often more compelling for its reluctance to pass judgment. The “Teenage” filmmaker is clearly sympathetic towards the so-called “biospherians,” whose cult-adjacent lifestyle belied a more profound understanding of the climate crisis than many people even have today; the Biosphere 2 project has been largely forgotten, and the very act of rescuing this story from the ash heap of history is enough to suggest that Wolf doesn’t just want to laugh at it (besides, we already have the classic motion picture comedy “Bio-Dome” for that).

On the other hand, the film doesn’t pave over the faults of the experiment, explain away its eccentricities, or suggest that the biospherians weren’t partly responsible for their excoriation from the press. Even in the rare moments when Owen Pallett’s lush and see-sawing score threatens to suggest otherwise, it’s evident that Wolf hasn’t made some kind of faux-inspirational doc about how the “people who are crazy enough to think that they can change the world are the ones who do.” On the contrary, “Spaceship Earth” touches down as a grounded and even clinical analysis of our natural skepticism towards dreamers — of how our hope can sour into hostility as soon as it loses an iota of its shine. And it might linger in viewers’ minds in a way that more explicit climate movies have not, because it confronts America’s seemingly irreconcilable disconnect between current actions and future consequences without getting stuck in the middle.

On a Magical Night

Have a Good Trip: Adventures in Psychedelics