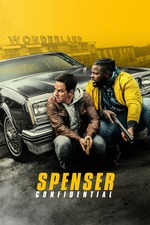 A far cry from the previous four movies that Mark Wahlberg and director Peter Berg have made together (the two men Voltron-ing into a single creative entity that will henceforth be referred to as “WahlBerg”), the hilariously titled “Spenser Confidential” is a high-testosterone action thriller about a red-blooded, blue-collared, perpetually open-mouthed American patriot who decides to take matters into his own hands when some bad guys besmirch the good name of these United States. Just kidding — the only significant difference between this chaotic dreck and the likes of “Mile 22” is that “Spenser Confidential” is going straight to Netflix (and, one must assume, the only reason it’s going straight to Netflix is that Barstool Sports doesn’t have its own streaming platform. Yet).

Beyond that — and maybe a surprising cameo from Post Malone — there’s almost nothing about this ultra-disposable programmer that doesn’t feel derivative to the point of self-parody. By now, WahlBerg making a “funny” crime movie about an aggro ex-cop trying to sniff out corruption in South Boston is like if Wes Anderson made a “Succession”-esque screwball comedy about an inbred family jostling for control over a Bavarian tweed factory (alas, only one of those films will ever actually exist, and it’s the one that features a drunken bar fight set to “Sweet Caroline”).

Based on a Robert B. Parker character, and adapted from the series of novels that Ace Atkins wrote about him, “Spenser Confidential” tells the simple tale of a former detective named Spenser who got thrown in jail for beating the living hell out of a crooked higher-up in the Boston Police Department. The movie picks up five years later, when Spenser is assaulted by a couple of paid inmates on the last day of his prison stint. It’s a clear message that our man should leave town as soon as he can. “Get the fuck out of Massachusetts!” someone yells, but Wahlberg will never get the fuck out of Massachusetts. Wahlberg is Massachusetts!