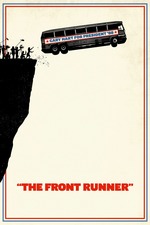 Before Anthony Weiner accidentally tweeted a picture of his bulging groin, and before Bill Clinton “did not have sexual relations with that woman,” there was Colorado Senator Gary Hart, who torpedoed his very credible shot at the 1988 Democratic presidential nomination because he couldn’t keep his dick in his pants. Like Weiner and Clinton (but more charismatic than both of them combined), Hart was a passionate statesman motivated by a genuine desire to better the lives of his constituents. And, like Weiner and Clinton, none of that seemed to matter from the moment Hart was caught with his pants around his ankles.

Judging by Jason Reitman’s lucid but lifeless attempt to dramatize the final weeks of his campaign, Hart’s scandal was the beginning of the end for political discourse in this country. The film takes that fact for granted. The twin questions that drive “The Front Runner” from its Altman-esque first shot to its whimper of an ending are more complex and open-ended than that: To what degree was the fallout Hart’s fault, and what role do the media (and the American people) play in the supposed degradation of our national priorities?