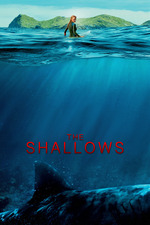 As Jean-Luc Godard famously never said: “All you need for a movie is a girl and a great white shark.” “The Shallows” presupposes is that adding a cute seagull, a rotting whale, and a few GoPro cameras to the mix probably doesn’t hurt. Unequivocally the best shark movie since “Jaws” (yes, even better than “Open Water” and “Deep Blue Sea”), this back-to-basics thriller either eliminates or reclaims all of the excess and gimmickry that have watered down the genre since Steven Spielberg first invented it — there’s only one killer fish, she’s shot in beautiful 2D, and it doesn’t appear as though the beast has developed the ability to swim backwards as the result of reckless genetic modifications. The film flirts with found-footage, but only in small and supremely effective doses; the shark is a digital effect, but a glorious one whose artificiality is only clear in a few crucial shots towards the end. With “The Shallows,” Spanish director Jaume Collet-Serra (“Non-Stop,” “Orphan”) finally earns the cult that’s been chomping at the bit to praise his recent work.