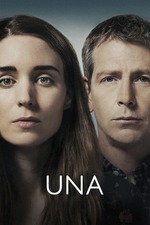 Una (Rooney Mara) hides a photo of him under a flap of carpet in the corner of her bedroom. The photo is new — it’s been freshly torn from the pages of a trade magazine — but the bedroom is not. It’s the same bedroom that belonged to her when she was a kid, the same bedroom she slept in when she was 13 and one of her dad’s 40-year-old friends started flirting with her at a barbecue in the backyard. It’s the same bedroom she returned home to after that man stole her away on a trip down the coast of England, the morally dubious couple pretending to be father and daughter as they made their ill-fated break for the border. She never moved out, never grew up. Her body matured to adulthood, but the rest of her was frozen in time, the girl fractured like the face of a broken watch.

Now Una is 28, and she’s found Ray (Ben Mendelsohn). He goes by “Peter” now, but starting a different life hasn’t made him a different man. So Una decides to pay him a visit. She takes a shower, throws on a black trench-coat and a pair of high-heeled clogs, and speeds off in her mother’s car. It’s a pretty long drive to the factory where Ray works, and Una clearly hasn’t thought things out that far — she looks tense and hollow in the rear-view mirror, as though she knows she’s about to see a ghost. When Ray scoots Una into a break room and asks her what she wants, her response is as curt as it is complete: “To see you.”

Remarkably, you take her at her word. You believe, without question, that Una doesn’t know what she’s going to do next. Rooney Mara has a rare gift for impassively conveying some unknown inner turbulence — the steadiness of her sharp features like the calm ocean above a shipwreck — and she often uses it to play every moment as though the next one isn’t predetermined. It’s one of the things she does better than just about any other actor of her generation, and it’s also one of the things that made “Una” filmmaker Benedict Andrews think of her as soon as he began casting his adaptation of David Harrower’s Tony-winning “Blackbird.”

“She was completely my first choice,” Andrews told IndieWire at the 2016 Toronto International Film Festival last year, where the Australian theater director’s big screen debut played for distributors who weren’t sure what to do with such an urgent and unafraid piece of work. Latin American company Swen eventually picked it up for a U.S. release, but the low-profile release and the difficult subject matter have combined to have made it difficult for Mara’s performance to secure a spot in the awards conversation alongside the likes of Sally Hawkins’s silent turn in “The Shape of Water” and Frances McDormand’s show-stopping work in “Three Billboards Outside of Ebbings, Missouri.” Still, Andrews’ assessment of his lead actress underscores why Mara is eminently deserving of the same attention. “There was something about her that struck so true to me in regards to Una, this woman who is fiercely intelligent and incredibly determined but — at the same time — completely raw and true and tender. Fragility and ferocity: That mixture touched me so deeply.”

READ THE FULL ARTICLE ON INDIEWIRE