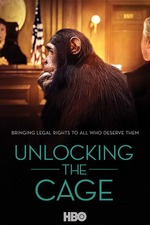 "Animals are people, too."

It's a common refrain, rich with irony, but legal scholar Steven M. Wise has made it his personal mission for the law to take those words at face value. In 2007, he founded the Nonhuman Rights Project in an effort to change the legal status of some animals from property to persons, and his tireless crusade — which eventually galvanized around a legal battle to emancipate two individual chimps — is the subject of the latest fly-on-the-wall film by documentary legends D.A. Pennebaker and Chris Hegedus ("Don't Look Back"). And yet, while the 90-year-old Pennebaker doesn't appear to deviate from the observational aesthetic that has defined his life's work, "Unlocking the Cage" is nevertheless an ill-fitting first for he and his partner: an issue-based film.