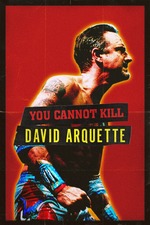 Actor David Arquette — who once posed on the cover of Vanity Fair alongside Leonardo DiCaprio, Matthew McConaughey, and the rest of 1996’s hottest leading men before the “Scream” franchise left him typecast as a terminal doofus — is just kind of sick of being a joke. “I’m just kind of sick of being a joke,” the now-48-year-old laments at one point in his new documentary while dressed in nothing but a rhinestone cape and vaping on the back of a pony in his backyard. It’s a funny moment in a movie full of good-natured howlers, but Arquette isn’t kidding. On the contrary, he’s willing to die for a little respect. And he just might have to in order to earn the kind of respect he’s looking for.

It all started when Arquette partnered with World Championship Wrestling to promote his goofy 2000 comedy “Ready to Rumble.” Well, technically it all started with Arquette’s childhood dreams of jumping into the ring alongside the likes of Ric Flair and Hulk Hogan, but the WCW audience didn’t know about that lifelong passion when the scrawny movie star came strolling into their arena and walked away with the championship belt (a scripted turn of events that Arquette vehemently protested behind the scenes, as he knew that wrestling fans would resent him for belittling their sport’s ultimate prize). Just like that, Arquette became too silly for Hollywood, and too Hollywood for wrestling. By trying to split the difference between one kind of showbiz and another, this overgrown kid — a self-described “carney at heart” — found himself rejected from them both.

At the beginning of David Darg and Price James’ “You Cannot Kill David Arquette,” its washed up namesake complains that he hasn’t had a successful audition in 10 years. That framing might distort the fact that Arquette remains a working actor (you might have seen him in “Bone Tomahawk,” or the new release “Spree”), but it sets the stage for a documentary that shares professional wrestling’s playful relationship with the truth; James and Darg’s film can’t help but explore how wrestling and cinema both exist within the same liminal space between fiction and reality, even if it does so in a less probing fashion than Robert Greene’s also wonderful “Fake it So Real.” Arquette is searching for a shred of legitimacy in a world that’s always made him feel like a fraud, and by the end of this lovable, hilarious, and ineffably heartfelt doc it’s almost impossible not to believe in him.