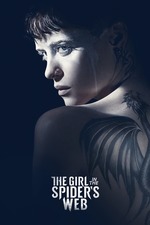 The Girl In The Spider's Web was an engaging and entertaining thriller. Firstly, I haven't watched a girl with the dragon tattoo and this is supposedly a sequel to that. Now I didn't need to watch that film before it however I definitely felt a couple of times a bit confused at what they were referencing too but I picked things up pretty quickly. The main thing you look for in a thriller like this is of course the action. The film definitely delivers on that, the action is intense and exciting, with a lot of nice fight choreography. The story was interesting and kept me engaged however it was very predictable and I found myself already guessing most of the twists. The acting was good all round, nothing amazing but all the actors played their parts well. Visually this film looks very nice, I loved the imagery of the spider whenever the villain showed up. Overall, The Girl In The Spider's Web was an entertaining thriller, but its predictable story and my lack of knowledge of the universe its set in does slightly make it weaker than other films in the action thriller genre.
Overall Rating: 8/10.