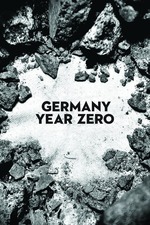 "German people, set your hearts at rest! We shall overcome! Victory awaits us in the end!"

Germany Year Zero suffers from all the melodramatic, disconnected from reality failings of the previous two films in Roberto Rossellini's thematic war trilogy. Though visually on par with his other work, the story offers a single poignant moral dilemma, placed in the hands of a one-dimensional obnoxious child.

Not to imply that the child was the only one-dimensional character, because Germany Year Zero offered a plethora. Between the moaning neighbour, unresolved sibling conflict and bed-ridden old man that complains about everything, the whole cast wouldn't feel out of place in a television sitcom. These almost comedic caricatures are never stretched or developed by a narrative that offers too little conflict and purpose. There's plenty presented that could have grown to a plot, the pedophilic Henning's obsession with Edmund, Karl-Heinz's refusal to register, even Edmund's relationship with Christl, none of these issues are progressed any deeper than maybe being arisen in a couple of scenes. In the very brief 70 minute run time there's only one conflict that's developed anywhere near past the surface level, that is Edmund's father's bedridden condition and want to die. Of course his was a depressing situation, and an ill father being a burden on his family could easily become the foundation for an interesting plot, but I don't feel as though Rossellini fully explores the affect it has. We first meet Edmund as he's working, but past that opening scene we don't see any further attempts at an honest job. He goes to the streets and conducts a couple of swaps to try and scrape some money, but when he's ripped off it has no apparent affect on him. A lot of my issues with how unemotive the story was may be linked to how utterly dreadful and unbearable the lead Edmund Moeschke's performance was, but even if he were on the same level as a Franco Interlenghi or a Enzo Staiola, I couldn't imagine him drawing any emotion on of this incredibly straightforward and self-indulgently depressing plot.

I am disappointed that in his three big neorealist films I'm yet to find my gem of Roberto Rossellini. As I wrote, visually this film is on par with Rome, Open City, which is by no means an insult. Rossellini frames the devastation of Germany in this film in a very cinematic yet distinctly candid manor, much like the work of Vittorio De Sica, the reality of the destroyed country is much more compellingly portrayed via visuals. The visuals alone, unfortunately, do not make up for a film that is almost insultingly simplistic and relied too heavily on emotional fluff over any real harsh social criticism.