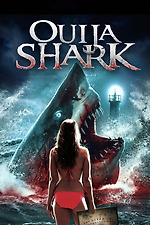 Anyone can look at Ouija Shark and tear every aspect apart. It’s a low budget movie about a shark that is summoned out of an Ouija board. Everyone knows it’s stupid. Even the movie knows, and the movie embraces it. That’s what makes Ouija Shark a genuinely enjoyable film to watch. As Brett Kelly (also known as Scott Patrick), the director of Ouija Shark, said during the Q&A, it was “made just for a laugh.”

Everyone should take a step back and ask themselves what ideology they have going into Ouija Shark. The person who takes this movie seriously is only making a fool of themselves. Keep an open mind and don’t waiver the chance to have fun. If that is really too hard, then what is the point of watching this movie?

Surely there’s one question on everyone’s mind: why? Why make Ouija Shark? What was the inspiration? Before this review formally starts, let’s dive into some information received during the director Q&A. There’s a simple answer to the question. Brett Kelly states that the “[concept] wasn’t my idea.”

For those unfamiliar with Brett Kelly’s previous work, one notable title that may stick out is his 2012 action-thriller Jurassic Shark. The movie took the internet by storm, becoming the lowest-rated title on IMDB for a period of time. Jurassic Shark was Brett Kelly’s earnest attempt to get hired by The Asylum. When he realized what his movie had become, he had one reaction: “what the fuck just happened?!”

“If they think that’s stupid…” Brett Kelly says in reaction to the angry babbling of the internet, “...[I’ll make] something even stupider.” Three years later Wild Eye Releasing, the distribution company, released Raiders of the Lost Shark. The film was directed by Scott Patrick, a pseudonym Brett Kelly adopted for his lower-budget films.

Wild Eye Releasing wanted another Brett Kelly shark film. While discussing his thought process, Brett Kelly mentions how he almost recommended The Invisible Shark, which would be a great way to mess with the easily-triggered audiences. As it turns out, it was Wild Eye Releasing that suggested the title Ouija Shark, not Brett Kelly. He decided to roll with it, David A. Lloyd wrote the screenplay, and they made the movie.

In due time, Ouija Shark will release for all to see. So, just how good is it? Nothing in the movie is going to blow audiences away. You have a very simple plot with flat characters. The green screen is noticeable and the writing is subpar. However, as Brett Kelly said, “we knew exactly what we were making.”

Ouija Shark doesn’t hold back on its absurd concepts. “[The] aim was to be ludicrous.” And ludicrous it was. Ouija Shark is hilarious. It’s the type of humour you’d get from The Room or The Fanatic. Only this movie knows it’s bad and it rams it to 1,000! Jon Migliore, who worked on the screenplay and visual effects, plays a character named Jill’s Dad. Migliore implements a sorcerer element to the film and steals the show with his hysterical scenes. The best part is how last-minute his scenes were. Had the movie not needed a runtime boost, we would not have this legendary character.

As enjoyable as this movie is, and while it understands itself very well, there are still some basic filmmaking elements that all films are judged on. Whether it’s a blockbuster or a direct-to-video shark attack feature, they all follow some basics. With Ouija Shark, the characters are extremely underdeveloped, the pattern of the shark attacks is unclear, the camerawork breaks the 180-degree rule, and the climax is slightly underwhelming. That doesn’t make the film any less enjoyable, but it does restrict a higher grade.

Before this review is wrapped up, here are a few facts learned from the director Q&A:

Ouija Shark was filmed over the course of five days with a ~$300 budget. It was originally intended to film across five consecutive days, but due to a scheduling conflict with one of the actors, filming was spread out across three months.

The film was scheduled to release during Shark Week 2018. Instead, the movie sat unreleased until the trailer dropped on January 23rd, 2020. This was surprising to Brett Kelly, who had no idea his film was finally releasing.

The shark hand puppet, which was made of real enamel, cost $200 and was originally intended to be used for Raiders of the Lost Shark.

Ouija Shark was filmed in Ottawa and Hamilton (Ontario, Canada). The camera primarily used was a Canon T2i. A Canon T4i was also used.

When asked about a potential sequel to Ouija Shark, Brett Kelly stated it is “never gonna happen.” He is burned out on shark movies and will be retiring from features after his next film.

As the film progresses, perceptive eyes might notice a stain on the Ouija board prop. This was caused when orange juice was accidentally spilled on the board.

Belly Kelly states that filmmakers need “thick skin” to make shark movies due to the internet. Apparently, the director has received death threats after his previous work on Jurassic Shark and Raiders of the Lost Shark.

Brett Kelly believes that people pretend to hate shark movies. People actually enjoy them and crave the feeling of superiority they get when they prove they’re smarter than the film.

Ouija Shark is everything it needed to be. No one expected an award-winning classic to birth from Ouija Shark. It’s just a cheesy low-budget shark movie. On top of all this, Ouija Shark has one of the greatest endings of recent years. Audiences looking to have a good laugh should definitely check out Ouija Shark when it releases on May 26, 2020.

Raiders of the Lost Shark