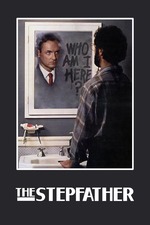 Daddy's home bitches! Make way for John motherfucking Locke! Actually, his name is Jerry Blake, actually it's Henry Morrison, no wait, Bill Hodgkins, aww fuck it, his name is just The Stepfather to us. Terry O'Quinn plays The Stepfather, a man looking for the right, american family, and when he grows old and bored of his current family, he viciously kills them, assumes a new identity and leaves again looking for another family. He becomes Jerry Blake and is married to Susan (Shelley Hack) and is happy, but his step-daughter, Stephanie (Jill Schoelen) doesn't like him and suggests that something is off with him.

This film is loosely based on real life murderer, John List who planned for over a month the killings of his wife, his mother, and his three children. He then assumed a new identity and re-married and was on the loose for nearly eighteen years. This film is more of a slasher film, but you can see how List and his heinous crimes attributed to the film and the crazed character of The Stepfather. Terry O'Quinn plays this character quite well and is utterly creepy. Even in scenes where he's just being plain nice, it's frightening, because you know this is some evil boogeyman, who won't hesitate to kill.

The rest of the acting is a mixed bag, but nonetheless still good, but it doesn't add up to the masterfully creepy performance by O'Quinn. The film isn't really all that bloody or scary. The opening shot showing The Stepfather leaving his old family's house and revealing the massacre he caused was terrifying, and the scene where he loses control over his current persona is genius. Then there's the ending which is pretty satisfying. Another thing, I found it weird seeing the character Stephanie nude in the shower. She's sixteen. That's a little creepy.

Other than that, not a whole lot happens, but it shows us how psycho he really is, as he goes out of way to just hide the truth and continue being someone he isn't. It's more suspenseful than slasher horror, but still, The Stepfather is pretty good for an 1980's horror film.
"Father knows best."