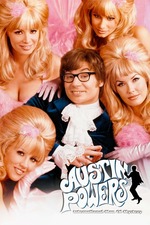 This first film has both Liz Hurley and to a lesser extent Mimi Rogers as the objects of Austin's affections, but The Spy Who Shagged Me had Heather Graham, Mini-Me, and that catchy Madonna tune Beautiful Stranger as it's secret weapons, so unfortunately I still prefer the second film to this one. Mike Myers' Bond and Our Man Flint spy spoof is typical of his goofy style he'd honed so perfectly on Saturday Night Live and Wayne's World, and the jokes come thick and fast. Playing the dual roles of British secret agent Austin Powers and his nemesis Dr Evil, Myers surrounds himself with some well placed comedy gems that include Will Ferrell, Seth Green, and Robert Wagner who plays Dr Evil's Number 2. It's silly, childish, at times fairly near the knuckle for a spoof, and utterly hilarious if you disengage your brain and simply enjoy the shenanigans of part-time secret agent and playboy Powers who's been defrosted in the nineties after being cryogenically frozen back in the Sixties. Rogers is fit, but Hurley, although a dreadful actress, really looks the part of a sexy secret agent. Much like her turn in Bedazzled, this is all about putting her in some sexy outfits and drooling over her. Myers' dual roles do make for some cracking exchanges between the two, but Dr Evil outshines Austin as the funnier of the two. This spawned two sequels with a third often talked about by Myers, and it's hard to believe that this first film is now twenty years old, I for one wouldn't mind just one more from Myers before he hangs up Austin's cravat.