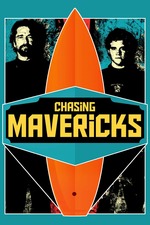 Ever since Kathryn Bigelow's Point Break, I've wanted to surf. I've had a fascination with the beauty, the elegance, the freedom, and the sheer lunacy that attracts people to risk life and limb for that ultimate rush. The closest I get however is the movies.
This story about surfer Jay Moriarity does have a slightly clunky script. Gerard Butler plays Frosty, an experienced surfer who teaches a young 15 year old how to surf the monster "Mavericks" waves that wash ashore at Half Moon Bay in California. Learning the foundation pillars of surfing and also shedding his inner demons, Jay seeks to conquer waves most would shit their pants at. There's a romantic sub-plot and a decent father figure/mentor appeal in the Frosty/Jay dynamic, but this is all about the waves and the insanity of the people who ride them.
Directed by Curtis Hanson and Michael Apted with cinematography by Bill Pope this has some incredible surfing sequences that defy belief. Thrilling, breathtaking, and tragic, this doesn't reach the heights of Big Wednesday on the spiritual side of things or The Lords Of Dogtown story-wise, but it does feature some truly exceptional photography that lingers long after the credits roll.