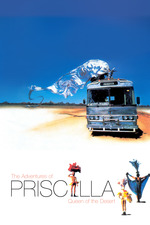 The Adventures of Priscilla, Queen of the Desert

Within the space of two years back in the early nineties Australian cinema produced three very high quality comedies in the shape of Muriel's Wedding, Strictly Ballroom, and this, the finest of them all, The Adventures Of Priscilla, Queen Of The Desert. Stephen Elliott's film is packed to the roof with iconic moments. From those stunning costumes and vistas of The Outback, to those incredible showstopping stage shows which are quite frankly inspiring, this has darkly comic laughs among the drama.
Beginning in Sydney, this film follows two drag-queens and a transsexual who travel inward to Alice Springs to put on a their risque show at a Hotel run by an old friend. Along the way the three encounter all those usual road-trip traumas. From a breakdown of their bus (Priscilla of the title) , to almost being lynched by rednecks in a one-horse town full of miners, this has it all. What makes the film though is the three central performances from Hugo Weaving, Guy Pearce, and the phenomenal Terence Stamp. The banter between them is often filthy, sometimes intimate and personal, but always very funny. Weaving is the one harboring all the secrets that are revealed during the trip. He's taken an invitation from his wife to come to Alice Springs and meet his eight year old son Benjamin, possibly the most well adjusted kid you could ever meet. For a movie with so many heart tugging moments it wears its heart on its sleeve as a camp as Christmas no holds barred comedy with attitude.
You can't talk about this film and not mention those fabulous costumes. They are stunning. From the bus-top glitz with the huge sweeping trains against that beautiful desert backdrop , to the ostrich topped costumes of the stage show, everything here is eccentric flamboyance. We also have one of the most attractive men of the sixties (my mother-in-law has a black and white canvas of Terence Stamp on her office wall in which he is almost magnetic) turning in a flawless performance of grace and poise. He takes to the role like a duck to water and should have had at least an Oscar nomination for what is one of the best of his career. Both Weaving and Pearce also knock it out of the park in a film that has feel-good written all over it. When you add to the mix a Filipino who shoots ping-pong balls from her fanny and a soundtrack that will have your feet tapping for the entirety of the movie, there aren't many better ways to spend a few hours.