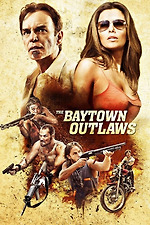 Every now and again you come across a film that just goes all out to entertain. This film pays homage to every action film and Southern set tear-up there's ever been, and although it could conceivably be a B-movie or straight-to-dvd type release, it does have moments of genuine greatness.
Southern rednecks (no offense meant) are usually good for either racist violence or laughs aplenty. We get a bit of both here and wanton carnage on a grand scale. Some of this is off the chart in both its audacity and all out Tarantino-esque fun. Focusing on the three Oodie brothers, redneck trailer-trash who work for a local sheriff disposing of criminals, this sees them hired to rescue a young boy from his godfather. The plot gets crazier by the minute, the violence gets more and more outlandish, and with Zoe Bell leading a sexy group of biker assassins on their tail, the action never ceases for even a minute. From the opening scene, this is mental. Wise-cracks and bloodshed ensue at every turn and as the film progresses you see that just maybe these nutters aren't quite as bad as they seem. A gun-battle to the sound of Lynyrd Skynyrd's Freebird, should say it all along with that confederate flag T-shirt.
Billy Bob Thornton and Eva Longoria may be the bigger names in the cast, but it's the Charlie Hunnam lookalikes Travis Fimmel and Clayne Crawford that steal the show along with man-mountain Daniel Cudmore who exudes an indestructible persona of epic proportions. They're dirty, smelly, sexist, racist, but you can't quite help but warm to them, I did anyway. Oh and there's one scene with Zoe Bell that's just great , I wont spoil it, just watch it.