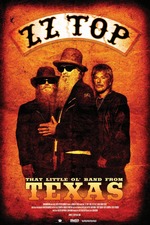 Unlike most people who discovered ZZ Top during their eighties heyday, I'd been a fan long before the trademark beards and the hot chicks appeared in the MTV generation videos. They were another of those bands that had a niche beginning, playing bluesy country rock with a rootsy feel in bars, dives, and strip-joints around Texas. They'll be the first to admit that when the classic line-up of Gibbons, Hill, and Beard got together in late 1969, they soon became the "same three guys, playing the same three chords". That's a very humble thing to say, but well off the mark, because these are three supremely talented musicians in their own right, and to steal a quote from The Blues Brothers, "they could turn goat's-piss into gasoline". Tres Hombres marked the start of my love, and almost 46 years after it's release I'm still listening to it regularly.

This is a band that's been together for fifty years now, and that's amazing in itself. Beard states that Hill and Gibbons have never wanted to quit, and Beard himself has never wanted to be fired, and that sense of humour from these guys has surely helped in their longevity. Even during Beard's stint in rehab many years ago, the guys supported and waited for him, no replacement behind the skins for these friends. They're a family, and it comes across clearly in this fascinating documentary on a band that has more than a hint of mischief about them. Beard especially recalls tales of the early days with a glint in his eye, the story of the gig played in front of one guy, where they played an encore and bought him a beer is the stuff of legend. But this doc is packed with those sort of things, and reminding me slightly of the patchy Kurt Cobain doc a few years back, with the animated sequences a hoot that simply add another flavour to things as the anecdotes come thick and fast. The footage of them without the beards but with ten-gallon hats and garishly coloured suits shows the way they shaped and adjusted their look as the years progressed towards their eighties zenith.

It's the older stuff that intrigues me the most, the tale about the invite from The Rolling Stones to support them in Hawaii really made me chuckle. The warning from their manager about only two drinks at the bar in the hotel before shows was also hilarious, with the guys finding a way around that problem too. A drink a foot wide and three feet high that sits on the floor that you drink with a straw was just the sort of mayhem you'd expect from them as they supported one of their heroes. The thought of Jagger mimicking them with a broom turned upside down as a beard from the edge of the stage just seemed surreal, but again this documentary does feature a lot of laughs alongside a host of classic archive footage of a band that knew excess as much as the next. This was a band who regularly played 300 gigs a year, they love it, and it shows.

If I have one issue with this documentary it's the fact that it seems to end abruptly following the success of Eliminator and Afterburner, simply stating that they were still together and still performing in their fiftieth year together. It would have been nice for the filmmakers to show their return to Gibbons' guitar driven sound of the later albums, and possibly show some footage of their more recent shows. Again though, this is fascinating stuff, and I for one am working religiously on my own Billy F Gibbons beard of my own, although mine is more white to his red.

Jeff Garlin: Our Man in Chicago