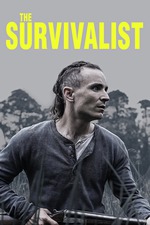 Wonderfully sparse and dark, this film cuts to the core of our notion of trust and demonstrates how trust is not fixed - its not guaranteed, it isn't something you earn once and have forever. Trust evolves, because ultimately it is projected, traded or shared between people. And people change.

For a long while, its just us and the protagonist. We watch his daily routine in this post apocalyptic world and wonder where this film is going. We come to learn that he has been doing his thing, alone, in the woods, for 7 years. And as the film rolls on and we watch him, day in, day out, carrying out chores - always cautious, always with his head over his shoulder and his wits about him we become equally as nervous as he is.

So as you can imagine, when people appear in his life, we do not trust them. Neither does he. But our sense of trust is not as damaged as his, because we've only been in his life for 45 minutes, not a full 7 years, so perhaps there is a door in our hearts for these strangers?

There is little in the way of speaking in this film for some time; even upon arrival of the strangers. I guess words and conversation don't have so much value when day to day life is about finding food and staying warm.

Watching the dynamic of trust in this film twist and turn is ultimately what its all about. Its a simple film, with only a handful of characters, set in one place and filmed for very little money - but with its simple concept it demonstrates a sublime commentary on the nature of how we, as human beings, trust one another.

A belter of a movie. Dark and unforgiving. A film that lingers in the mind.