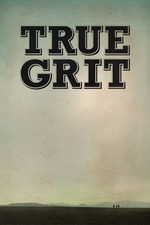 It's also Jeff Bridges in his second best career role as the weathered Marshall Rooster Cogburn in what starts as a farcical hunt for a man who is probably far gone. But Cogburn wants the money and the young Mattie Ross (played by the exceptional debutant Hailie Steinfeld) seems like the perfect, harmless, defenceless girl to take it from. How she proves them all wrong.

What I love most about this movie, besides the simplicity of its story, is the excellent use of such a wealth of actors, but specifically a cast in which all members are used so sparingly. John Brolin appears for only a matter of minutes in the entirety of the film, while Barry Pepper is fantastic for a fleeting time as the head honcho of the grizzly crew Bridges hunts down. No matter the screen time of these rough, nasty bastards, despite how short a time we see them - they are just as nasty, dirty, bad and twisted as any cowboy villain with ten times the screen time.

I'd say this is probably my favourite Matt Damon appearance as well. He is wonderful, both adding comic affect with his initially bumbling Texas Sheriff routine, but fundamentally he demonstrates the moral fibre around which this tale of revenge, rescue and ultimately loyalty is based.

To summarise - when you watch the film, watch out for the horse Old Blackie. Old Blackie will show you what loyalty is all about. He will show you true grit. And so will Marshall Rooster Cogburn, before he vanishes into the sunset.