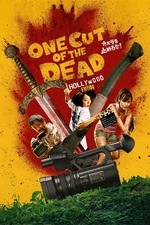 One Cut of the Dead Spin-Off: In Hollywood 2019

Boring, dumb, and proof that sometimes you're best off leaving the original movie alone on it's own.

This is a (very short) sequel to the fantastic 2017 Japanese horror-comedy One Cut of the Dead. The formula for this sequel is the same -- a long continuous sequence from a B-movie to start, followed by a behind-the-scenes style story that shows all the silly and unexpected stuff that happened leading up to the filming of the movie and the concluding with a third person take on what is happening while the movie is being filmed.

This worked extremely well with One Cut of the Dead. Everything was fresh, the story was engaging and entertaining, and the comedy was spot-on. In the sequel, everything seems forced, the jokes don't land, and since we've already been through this process before, it doesn't feel as entertaining the second time around.

Star Yuzuki Akiyama from the first film takes more of a back seat supporting role in this film and is replaced by Mao as the lead character in this sequel. There isn't anything really wrong with this as they are both capable actors, but the fact that Akiyama can carry a 37-minute non-stop one-take sequence in the first film and then takes a backseat here is a head-scratcher.