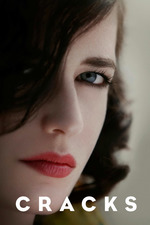 Is young Juno Temple not the most adorable little thing ever? Even though she is playing an absolute brat for most of the time in this film? Quick side note: if it was not for the fact that Eva Green stars in this movie as well, Juno would have been a step closer to the title ‘most nude/topless scenes in a career’ (she will get there eventually). Anyways, Juno’s performance is, as always, great and it is striking to see such a young actress (she looks much younger in here than freaking twenty) reach such peaks. What a talented lady. Her character is the clear centrepiece in this movie; despite her nastiness, she remains relatable and dare I even say likeable. Did I mention how talented she is already? Cracks is a very interesting film that lacks the matching atmospheric depths to be as great as its central star. Especially towards the last third of it, the film begins to trade in initial authenticity for a touch of melodrama, which really does not suit the timid elite boarding school setting. Still worthwhile though, even if it is just to watch Juno Temple act her guts out <3