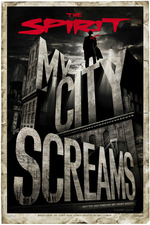 I was 12 when this came out, and the trailer made it look like the coolest thing ever. I was kinda obsessed. But then I actually saw the film on DVD a year later and was very underwhelmed.

So how does it stack up a decade later? Well, it's frustratingly visually stylish, which shouldn't be surprising given Miller's credentials. Unfortunately that's pretty much where the positives end. Everything else is kind of a disaster. Although as ever, Sam Jackson makes it through fairly unscathed.