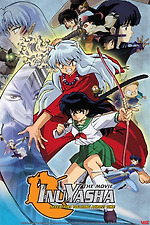 Really cool opening credits sequence, great theme song (Affections Touching Across Time), then about an hour of kitchen sink storytelling before the movie finally gets good. Probably hard to get into unless you've watched the anime series, because the character introductions were not set up well-- for instance, Kagome tells the audience that Kikyo's story is "better off left for another time", and Sesshomaru's fight served no purpose except fan service and unnecessary exposition. Critical moments at the beginning of the film were wasted and could have easily been replaced with the formation of the battle party, maybe a trip to Sango's village to pick her up and then the fight against the scorpion. Menamoru after that.

Anyway, the animation is great and gets 4/5 stars. Wasn't happy with Kagome's look which was weird, because all of the other characters looked like they matched the anime. The Kirara thing sucked, but Miroku's Kazaana versus Kazaana battle was awesome. Shockingly, Shippo-chan, who I normally find annoying but tolerate, was hilarious in this movie. He's surprisingly funny when the writers aren't just having him get hit upset the head by Inuyasha all the time.

A minor nitpick-- characters are always getting rescued by other party members in the nick of time. It would be better to mix it up once in awhile and just have the whole group congregate together in the middle before the enemies attack all at once and everyone manages to survive on their own.

Finally, the biggest problem with Inuyasha the Movie was that it was absolutely of no consequence, neither to the anime nor even within the film. At the end Miroku says everything went back to normal. What's the point of telling a story unless something changed? Of course the movie can't alter the manga and anime, but Affections Touching Across Time was cinematic and big enough....why not plan ahead and scrap Menamoru and make Ryokutsei the villain of the first movie, since Inuyasha beating him and learning Backlash Wave all happened at the same time?

Oh well....the last 30 minutes were really good. They saved the movie honestly, making it pretty decent at least if you're a fan of the series.