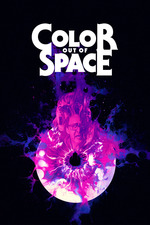 "How can any of this be happening?"

Easily one of the most visionary horror films I've seen in years! I know we use this term a lot, but the visuals are mindblowing! And mindblowing is an understatement here!

Definitely this year's Mandy, (except with better set up characters and you actually know what's going on for most of this!) I personally think Nic Cage gets a little too wild, too soon, but I know people like their crazy Cage performances (but like, I mean, I think he's doing a Trump impression for at least some of this?)

Thing I'm most impressed with is the adaptation. I really like Lovecraft's stories, and I know they're not easy to adapt to film but this really worked well for me. The humor is a nice addition to the story, the update to bring this story to modern times works great, and what better way to update a racist, sexist writer's work to than making the two leads a young woman and a black man?!