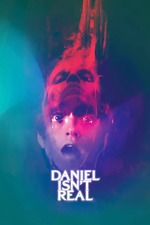 Wow, this had surprisingly more in common with the Lovecraft film that preceded it than I expected! I loved the premise of this and the way it takes that initial premise and then effective flourishes into a feature story. I think if you lean on the film too hard it says some unfortunate things about being an artist and mental illness, and the script has a few head-scratching moments, but overall I just found the film to be a really fun time.

Patrick Schwarzeneggar is REALLY good in this, I not sure that this is evidence he is going to be a huge star, but he certainly works well in this and someone was smart enough to realize that he'd be really good for this part.

Lyle Vincent might be my new favorite cinematographer, not only did he shoot this but also Thoroughbreds and Ana Lily Amirpour's A Girl Walks Home Alone At Night and The Bad Batch. He's really good at finding interesting ways to shoot things that most D.P.s might just shoot in a boring normal way.

A cool thing about this is it kinda feels like a reverse Fight Club with a built in spin on The Exorcist, but also elements of the cosmic horror of Hellraiser and Cronenberg's body horror films mashed in too. Shudder is probably a good place for this, I think horror fans will appreciate this more than general audiences.