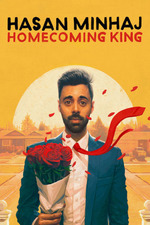 This is one of the most outstanding comedy specials I've ever seen. And calling it a comedy special almost seems minimizing, because it's just as sad as it is hilarious. It's amazing how seamlessly Hasan makes a single joke go from a crushing anecdote about post 9/11 racism to a high-energy goof that finds him running around the stage. And the most impressive part? It's not meant for me.

Hasan's debut one-man show had large production values, timed bits, and stories that were more sad than comedic, and wove Indian colloquialisms and scenarios through the whole thing without stopping to explain them, because he didn't need to. It was written completely from his point of view, without being made more palatable for a larger (read: white) audience. And it still worked so well. At many points, he goes to the audience for commentary and it's clear that they all not only understand it, but many of them even relate to it. Fucking inspirational.