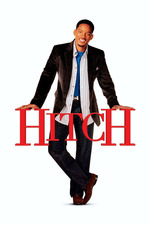 Honestly shocked at how much this movie holds up! I liked it! It's genuinely charming! And funny! Hitch is good! However, I have one big big problem with it:

Hitch was released in the United States February 11th, 2005. Four days later, on February 15th, 2005, the film's lead Will Smith released the first single from his album Lost and Found, which was titled– "Switch." Song's a banger, lyrics are questionable, it's used to great effect to make us all fall in love with Paul Rudd in I Could Never Be Your Woman.

Now with the release dates so close, the similarity in titles, and Smith's history of song/film synergy, you'd THINK the song would make an appearance. Maybe even in the final scene where all the characters we have come to know and love over the film's runtime dance together, as was the tradition of the time. But nope. And frankly, that choice is unforgivable to me. Make it right, Will.