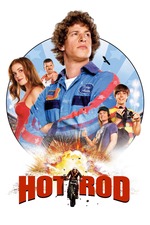 I would never call this movie perfect, but it’s still my absolute favorite film. It might not even be the best Lonely Island movie– I started watching Popstar again right after it, and I think that movie might be more brilliant. But Hot Rod is still number one for me. It’s a passion project that doubles as a masterpiece of absurdist humor. It’s taken it’s rightful place as a cult classic, but it still kills me how under-appreciated this film is, both in its box office performance and how infrequently it’s discussed with the heavy hitter comedies of the 2000s. (God damn you, Apatow, McKay, & Philips)

I could easily, easily write a thousand words on this movie, how it’s an outstanding satire of masculinity, how impressive it is that they manage to balance so many distinct types of comedy and nail every one, and how movies allow The Lonely Island to rise so far above what they ever could’ve done on SNL. There are dozens of scenes in this film that don’t service the plot and could have been easily cut, but I wouldn’t lose a single joke, a single shot, a single second.

(Okay, exactly one second- the joke where Ian McShane calls Rod a “homo,” but that’s it! Maybe give more stuff for Denise to do! BUT THAT’S IT!!!)