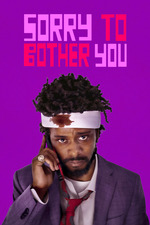 I can’t believe I’ve never seen a movie like this before. Not anything even close to it. Every frame of reference I have for what kind of movie this is isn’t enough, in plot or style or the gross, uncomfortable, energized way it made me feel. It’s the most insane movie I have seen in years.

This movie is so visually inventive and progressive in the most perfect, non-patronizing way and the biggest downside (aside from pacing, which might just be my own brain thinking any movie is too long) I can think of is that it’s very clearly made by a director who hasn’t directed before. That doesn’t even ruin the movie, it just makes certain moments (like shots shifting focus, or distracting ADR, or weird fades) stand out and distract from what is a super gripping movie. I almost want to call it a parable, but it’s not far-fetched enough from real life to qualify. I will absolutely go see whatever Boots Riley makes next.

Fuck. I wish there were storied directors who would use their cache to make original and nutty movies like this, instead of just adapting books or telling the story of one of the many world wars. Why can’t Spielberg or Fincher do some shit like this?