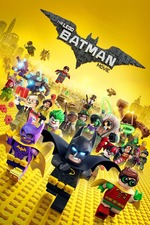 my tweetstorm about it:

I can't believe that i get to live in the universe where "Lego Batman" is not only a movie that is released, but it's absolutely stunning. From the second the first legos appear on screen I couldn't stop beaming. It's hilarious, goddamn adorable, clever, gorgeous, and SO DAMN FUN.

About 10 minutes in I realized all the great things about the movie are the things I've just felt like movies lost in the last few years- good slapstick, audience-conscious Zucker Brothers-style parody, exciting children's adventure films- it's all there. Not gone. Just evolved. Into something like Lego Batman. The people that now make movies like Lego Batman watched the same kinda shit as me growing up and they got to morph it into something for another generation of kids. That rules! I hope they're proud to make good work out of a project that could EASILY have been a ploy to rob impressionable kids of money in exchange for a series of platitudes. Lego Batman was delightful.