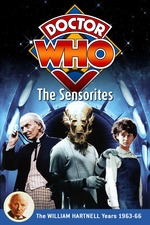 Doctor Who: The Sensorites

It’s not an original observation about ‘The Sensorites’ but it’s nonetheless true: it has some of the best ideas in the first season of Doctor Who, certainly among the science fiction stories, but they’re given such clumsy and boring treatment they’re easy to miss.

The problem is not so much in the production: within the budget and technical limitations, we’re given a reasonably respectable first glimpse of a spaceship other than the TARDIS and a few rooms and underground passages on an alien world. It’s mainly the writing that’s so badly misjudged, with overcomplex plotting, lots of padding and enough things that don’t make sense to irritate the audience. The regulars are used relatively well, and the discovery of Susan’s telepathic ability is a return to deepening her original unearthliness which was sadly soon forgotten again, but the human guest characters are deadly dull.

The pacing is so askew that what should have been a shocking and powerful plot twist challenging everyone’s assumptions is dealt with perfunctorily in the last ten minutes of a six-episode story. This is the revelation that three earthmen whom we haven’t met before have been attempting systematically to exterminate the entire Sensorite population by poisoning their water supply, motivated by sheer greed. If you listen carefully, the possibility of their existence is seeded in a few lines of dialogue, so they’re not quite a deus ex machina, but the setup is still so badly handled that when they do appear it seems like the ending of another story entirely has been tacked on.

The problem isn’t with the appearance of the Sensorites themselves. Though they’re obviously men in horror masks, like many of the SF elements in the early stories they look weird enough to escape the clichés of the genre. The design team has achieved the balance required by the story, that they should provide a scare on first appearance – like the episode one cliffhanger when the first one we see pops up at the spaceship porthole – but shouldn’t look so disturbing that it gets in the way of developing them as sympathetic characters later.

These design requirements point to the story’s strongest card, the argument that not everything different in appearance is hostile, and that sometimes the creatures who look most like us are capable of the greatest harm. Such ideas are explored surprisingly rarely in Doctor Who which, for all its liberal reputation, too often resorts to the cliché of undifferentiated monsters who mean us ill. ‘The Sensorites’ interrogates such clichés and the racist metaphor that underlies them: not only that the ‘others’ all look alike but that they all think and behave alike, with equally wicked intentions towards us. Some reviewers have spotted parallels to contemporary popular views of Maoist China in the depiction of the Sensorite society, with its wise old men, suspicion of others, rigid hierarchy, uniform dress and population who ‘all look the same’, and that may have been an influence, but the story turns some of these things on their heads. The trust the Sensorites have for each other makes them vulnerable to the ‘one bad apple’ like the City Administrator, and their suspicions of earthmen turn out to be dramatically justified.

In playing with all this, though, the script comes up with some very silly ideas. Not only can we not tell the Sensorites apart easily, it transpires, neither can they, to the extent that one can impersonate another convincingly just by wearing his insignia. Even more absurdly, the Sensorites haven’t noticed this, until the City Administrator overhears a human saying they all look the same and decides to turn this to his advantage. Now, the idea of an intelligent species who can’t differentiate individuals is an intriguing SF idea, but surely it would result in a much less recognisable society than the one we see here. And we can tell the Sensorites apart if we try: they all have different body shapes, different ways of moving, different voices and even subtly different faces too. It doesn’t make sense that, with their telepathic ability and oversensitive hearing, the Sensorites would be so insensitive in distinguishing each other.

There’s a fascinating special feature on the DVD in which Toby Hadoke attempts to flesh out what we know about writer Peter R Newman. This was his only Doctor Who script, and, it turns out, one of only two completed major works. The other was a film screenplay for Hammer, Yesterday’s Enemy (Val Guest 1959), in which he drew on his own Army experiences to tell a gritty tale set in Burma in World War II, featuring sympathetic Japanese characters and atrocities committed by the British. In ‘The Sensorites’, it seems, he was at least partly retelling the same story. According to his family, Newman subsequently suffered from writer’s block before dying young in a freak accident: it would be interesting to know what other ideas he failed to realise.

Location filming: None, though a few filmed model sequences.

First appearances: The Sensorites have since been acknowledged as a related species to the Ood.

Gallifreyana: Susan’s telepathy in this story suggests her species has mental abilities different from humans, and indeed Time Lords including the Doctor use telepathy in later stories. Though it could be a latent ability some humans share, as it’s triggered by proximity to the Sense Sphere, and fades when the TARDIS moves elsewhere.

Interference: Puzzled that they still seem to be moving even though the TARDIS has materialised, the travellers venture outside, finding they’re on a spaceship with the human crew apparently dead. As the crew members, who have been trapped aboard by the Sensorites, recover from a deep coma and the travellers assist, a Sensorite removes the TARDIS lock to stop them leaving the vicinity of the Sense Sphere. It turns out Susan, like the Sensorites, has some telepathic ability, and they explain through her that they have good reason to entrap the humans. When the Doctor learns their population is being reduced by a strange disease, he offers to help find a cure in exchange for better treatment for the humans. He quickly links the problem to the water supply, but not before Ian has contracted the disease.

Adversary: The Sensorite City Administrator, who in contrast to his colleagues is both viciously xenophobic and ruthlessly ambitious, is the main bugbear through most of the action. But it turns out the real villains of the piece are a small group of humans whom we don’t meet until the very end.

Monsters: The Sensorites, humanoids with strangely decayed looking faces, bulbous rear skulls and a smattering of wispy hair. They all look similar and even find it difficult to tell each other apart. All the ones we see speak with what sound like male human voices, so we don’t know if they have differentiated genders. They all wear grey onesies with curious disc-shaped integral footwear: it’s not clear whether these match the shape of their feet or if it’s a fashion thing. They have latent telepathic ability though for full effectiveness this needs to be amplified by a communicator disc. They don’t like loud noises, but they do like bright lights: they can’t see in the dark and are terrified of it. Their society is built on mutual trust and when one of them breaches this, the others find it difficult to believe.

Adversary’s Cunning Plan: The hostile and intolerant City Administrator disagrees strongly with his superior the First Elder’s decision to welcome the travellers and allow the Doctor to work on a cure, believing they can’t be trusted, and decides to take the law secretly into his own hands. First, he tries to kill the visitors remotely using a disintegrator weapon but is interrupted. Subsequent sabotage attempts against the wishes of the First Elder prompt him to become more ambitious for his own power. He kidnaps and later kills the First Elder’s deputy, the Second Elder, and starts posing as him. Successfully deceiving the First Elder about the identity of the Second’s killer by fitting up a minion, he is appointed as a replacement Second Elder, partly at a suggestion of the Doctor who knows nothing of his ill intent. The Administrator then tries to trick Susan with a fake letter, which ultimately leads to his exposure.

But unknown to any of these characters for most of the story, a far more wicked plan is proceeding. The humans on the spaceship are survivors of an exploration mission which found extensive reserves of a valuable mineral, molybdenum. Their colleagues were apparently killed in an accidental spacecraft crash, but this was faked: instead, they have concealed themselves in the underground aqueduct serving the Sensorite city, knowing they are safe from discovery by the city’s inhabitants, who are afraid of the dark. They are deliberately poisoning the water supply with the intention of exterminating all the Sensorites so they can claim the planet and enrich themselves with its resources.

Adversary’s cronies: Various unnamed Sensorites assist the City Administrator in his scheming, including one who is wrongly blamed for killing the Second Elder.

Temporary allies: The three humans on board the spaceship at the beginning: Captain Maitland, Carol Richmond and her fiancé, John, a mineralogist who first discovered the molybdenum but has been driven to a breakdown by the Sensorites’ mental interference. None of them knows that their colleagues survive and are working against the Sensorites. The First Elder, the wise and tolerant Sensorite leader: although he’s reluctant to let the humans and the TARDIS crew travel freely, he ultimately treats them in a civilised way and is prepared to work with them. The deal Ian and the Doctor initially broker with the First Elder involves Barbara and Maitland staying on the spaceship, while the Doctor, Ian, Susan and Carol go the Sense Sphere with John, whom the Sensorites agree to cure of his mental problems. Maitland is never seen again after the action shifts to the Sense Sphere, but Carol and John, once he’s cured, play minor roles in the plot. A Sensorite scientist assists the Doctor.

Doctor defeats Cunning Plan by: Working out that the ‘disease’ is the result of deliberate poisoning, developing an antidote and, with Ian, locating and exposing the scheming humans. He’s much more active here than in previous stories and makes more obvious use of his advanced knowledge and skill.

Star spotting: The scheming City Administrator is played by Peter Glaze, later known to generations of British children as the clowning co-host of children’s variety show Crackerjack. You won’t see his face, but his rotund physique is all too apparent in his tight grey onesie.

Doctor Who: The Aztecs