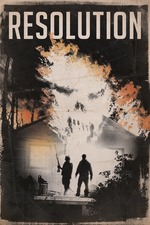 For a (very) low budget Film this is well done technically and I like the style. I just don’t get how Michael’s brain is supposed to work. He runs head first into multiple bad situations and, without any second thought, accepts that some higher power is at work and goes with it. „There is a library book lying at the door where THERE WAS NO LIBRARY BOOK BEFORE and he grabs it and says „some cool stories in there, I’ll bring it back to the library where it belongs“. Am I supposed to sympathize with this guy? The crazy drug addict makes more sense than him.

I don’t have a problem with stories that leave some things open to interpretation but this film is all over the place and nothing ever gets resolved. It’s the kind of „intelligent“ mystery I would expect from teenagers, not grown men. I know there are some comedic elements in this film but it is not a comedy so the plot itself should make sense. And I do not understand why it is labeled as horror. There is nothing horror about it.

I’ve watched this because I want to see The Endless and people here recommended to watch this first. Not sure if I want to continue this journey now. I probably will though.